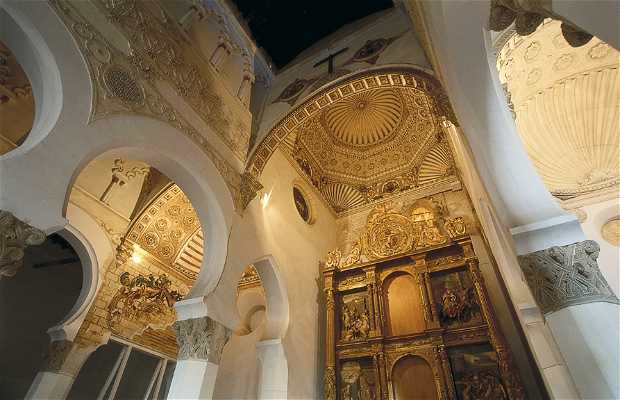 The Santa María la Blanca Synagogue is the main synagogue of Toledo’s Jewish Quarter. It was built, according to a carved inscription in a beam fragment, in the year “four thousand nine hundred and forty” (1180 AD, since it’s talking of the Jewish calendar).

It was reconstructed in the 13th Century and converted into a Christian temple in 1405. In the 16th Century it became a penitential shelter for repentant women, and from this same time period are the three chapels, as well as the altarpiece attributed to Berruguete or Juan de Borgoña. In the 18th Century it was converted into headquarters and in the 19th Century it suffered the effects of the freeing of encumbrance and it was used as a warehouse.

The Most Beautiful Synagogue in Spain

The Santa María la Blanca Synagogue is located inside the Jewish Quarter, the Sephardic Toledo. It occupied a tenth of the territory. The Josef Ben Shoshan synagogue was built in the 12th Century, around 1180 (according to an inscription in the door) and reconstructed in 1250 after a fire.

Decades before the expulsion, it stopped being a synagogue and it was converted into a church. In 1554 a sanctorum was founded under the protection of the Penitentiary Shelter that took in repentant women. In 1791 it became a military headquarters and in 1798 a warehouse. In the middle of the 19th Century, the Provincial Commission of Historical Monuments took care of the building. In 1930 it was declared National Monument.

The oldest synagogue in Europe

The Santa Maria la Blanca Synagogue is one of the most beautiful and famous sights in Toledo, as well as arguably the oldest surviving synagogue in Europe (it was originally built in 1180). What strikes you immediately when you enter the synagogue is its striking, elegant simplicity: horseshoe arches, octagonal columns, simple walls, all painted in a pristine and radiant white.

Another thing that makes Santa Maria la Blanca special is that it truly exemplifies Toledo’s moniker as the “City of Three Cultures.” The synagogue was built during the era of Christian rule in Toledo, but it was designed and constructed by Muslim builders and, of course, used as a place of worship by the city’s once-considerable Jewish population. The Moorish touches are evident in the decorative capitals on the pillars and the geometric patterns on the upper walls and in the floor tiles. Given its Mudéjar flourishes and striking geometric simplicity, it almost feel more like a mosque than a synagogue.