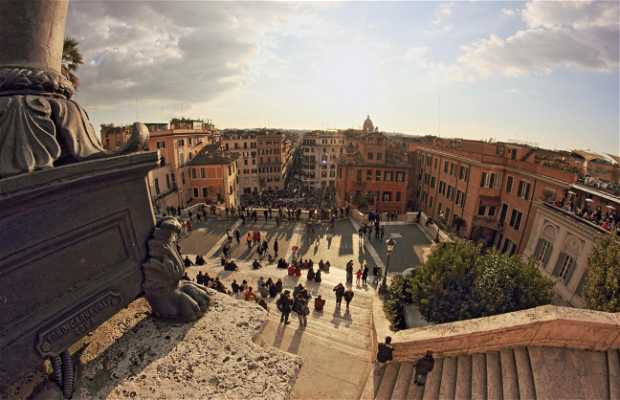 One of the most famous in the city

Piazza di Spagna is one of the most famous squares in Rome. You can reach it by following the Via Due Maccelli. If you’re coming from the Trevi Fountain, go past the Column of the Immaculate Conception and you’ll find Bernini’s famous early-baroque fountain, the Fontana della Barcaccia. It is surrounded by the famous steps of the church of Santa Trinita dei Monte and the start of the Via dei Condotti.

Good for a walk and people-watching

This is where the Spanish Embassy to the Holy See was built (hence the name) and it is now one of the most iconic squares in Rome. I like visiting because of the shops in the surrounding neighborhood, now one of the liveliest and most glamorous in Rome.

The Spanish Steps were built in the early 18th century to connect the square with the Trinita dei Monti church. If you climb to the top of the steps, you have unbeatable views of the Via Condotti and of the city.

Heading down Via del Babuino, you'll arrive at Piazza del Popolo, another worthwhile stop. There, you'll find the

This staircase with 135 steps, was inaugurated by Pope Benedict XIII for the Jubilee of 1725, and was built with contributions from House of Bourbon from 1721 to 1725 to connect the Spanish Embassy with the church of Trinita dei Monti.

The Steps were designed by Alessandro and Francesco De Sanctis, after many discussions on how to bridge the gap. Finally, the grand staircase, decorated with numerous garden terraces was chosen. The staircase was restored in 1995 and now it’s almost always

This is one of the most famous squares in Rome

Beautiful view from the top of the stairs.

Worth to climb up to see panorama of Rome

I love seeing horses passing by in front of Chanel and Versace shops.

If you love high fashion, you absolutely can’t forget to walk down Via del Corso and meet new nice people.

So very crowded. You can prefer go to evening hours.