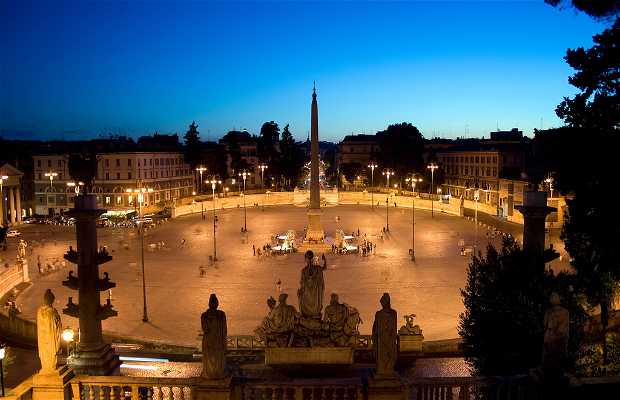 A treat for the eyes

The Piazza del Popolo is one of the most famous squares in Rome and its name means "the People's Square." It’s located at the north gate of the Aurelian walls where the Porta Flaminia once marked the beginning of the Via Flaminia, the main northern road during Imperial times.

The square currently has a neoclassical look thanks to architect Giusseppe Valadier who redesigned it from 1811-1822. If you look at the square from the north, there are three main streets which sprout from the square in trident shape: Via del Corso in the center, Via del Babuino on the left, and the Via di Ripetta to the right. The twin churches of Santa María dei Miracoli (1681) and Santa Maria in Montesanto (1679), begun by Carlo Rainaldi and completed by Bernini and Carlo Fontana, mark the intersection of the streets.

One of my favorite places in the city

When you get to the Piazza del Popolo, it’s best not to focus on anything in particular, but rather just soak in your surroundings and enter in the ecstasy of the Eternal City! The obelisk of Heliopolis, the hanging gardens of Pincio, the sculptures and Valadier fountains, the Renaissance façade of Santa Maria del Popolo, the Baroque dome church of Santa Maria dei Miracoli.... And none of this scene just came abut at random. It was all carefully prepared since the Porta del Popolo was for many years the only gateway to the city for those coming from Northern Europe, like Queen Christina of Sweden.

Roma, beautiful city, lots of places to visit, a must

This is absolutely my favorite place

Cause the first time I’ve ever been in here I saw a paradise. It’s amazing going to Popolo in Summer: you can everything so sunny and there are so many musicians playing and singing or dancing all around this place. Oh, and if it gets too hot, I swear there are a lot of bars and restaurants, or even hotels like Hotel de Russie, the most famous one of Rome.

I love all the piazzas of Rome. Each one is unique and interesting.