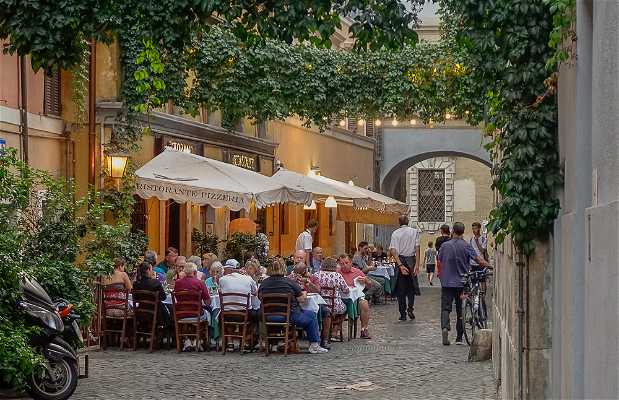 The essence of Rome's charm lies in its historic ruins and architecture, two facets of the Eternal City which continue to seduce and enchant thousands of visitors.

Aside from the city's imperial highlights, a certain Etruscan flavor can also be found in the charming Trastevere neighborhood. It is said to have once been the most popular part of the city and that Julius Caesar himself lived in one of its majestic gardened homes.

Trastevere is a paradise for city-explorers. If you like the walk the streets and soak in the old-fashioned atmosphere of traditional trattorias, then this district on the banks of the Tiber is for you. There's nothing better than having a good slice of pizza al taglio on a sunny terrace before heading off to sample some refreshing gelato.

Trans Tiberis (Trastevere) is located on the west bank of the Tiber, south of Vatican City. Walking through the narrow streets and alleyways, you are slowly immersed in a magical area that unites the past and present. Its restaurants and pubs are full of colorful and original decorations and plenty of blooming plants. Among the monuments you can visit is the lovely Basilica di Santa Maria in Trastevere, one of Rome's oldest (founded by Pope Callixtus I in the 3rd century). You can reach this charming neighborhood from Largo di Torre Argentina, where you take a tram and in less than five minutes you're there.

Meaning "beyond the Tevere". A beautiful district of Rome. I could literally live there. Don't miss it, if you visit Rome.

Lists and places related to Trastevere

Links to Trastevere
Hotels near Trastevere Neighborhoods in Rome
See something odd?