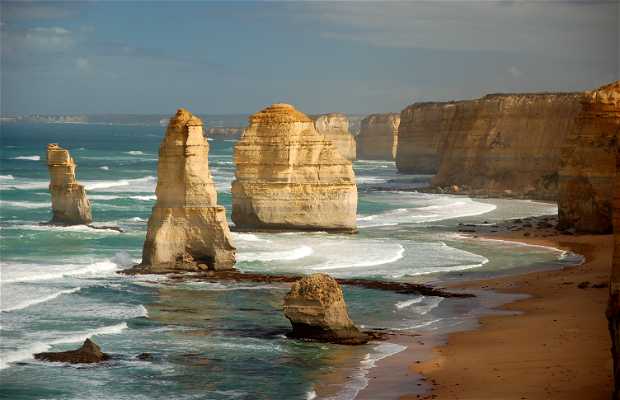 Besides the famous Twelve Apostles, the whole Great Ocean Road has impressive cliffs, rocky formations sculpted over the sea of ​​great beauty. One of the most striking is called London Bridge. Originally it was a ledge over the sea with two arches, which seemed like a bridge built on purpose. A whimsy of nature. The fact is that in 1980 the central section of the "bridge" broke down, disconnecting it from the coast ... and trapping two hikers in its central part. It took several hours by helicopter to rescue them. Imagine how distressing it must have been waiting hours.

The power of the sea

I can only add that the power of the sea and the erosive forces of the wind and water are magnificent. One day when the wind literally almost blew us over, we stopped to admire the scenery and the force really made us feel full of strength and power in our own flesh.

Sound of the wind

Over the course of thousands of years, these hulking giants have been battered by the wind and waves, a battle which they can't possible win. Of the original 12, only a few of the great Apostles are left standing, but the sight they make is breathtaking.

Melbourne trip with my friends from...

Melbourne trip with my friends from Mexico. The last trip before to come back to Chile. It was rainy, but that was not avoid to enjoy a lot the landscapea there