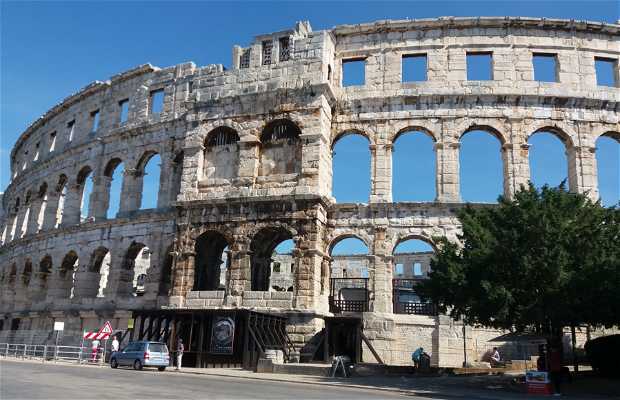 Arena that was next to the Colosseum

The Arena is the monument which is the most significant and well-known of Pula, on the southern tip of the area of Istria in Croatia. Before that, this area was part of the Roman Empire, and they constructed what is now named after Arena di Pola. Here there were were organized gladiatorial fights. It was constructed in the 1st century, in the time of Emperor Vespasian, alongside the most famous style construction, the Colosseum in Rome. It is elliptical. In the center, there is a flat space, which acted as the arena for fighting. In total, over 20,000 people came to see the fights. The structure is of limestone of the area and is well preserved today.

The Roman theater was probably built in the first or second century, on a hill at at the foot of the ancient Castrum. At this time, it probably occupied a much larger space than what can be seen today. There has been a partial excavation of the site, but the archaeological investigations are not yet finished. It is, of course, located just east of the foot of the hill, for better conditions during performances, less wind, brighter light and acoustics. Using the hills to build an amphitheater was typical of the Greeks, not the Romans. But it is called a Roman theater because they built it. The theater was divided into architectural areas and the middle section was where the actors and the orchestra performed.

Ampitheater impressive on the outside but not inside

The most famous monument is the amptitheater Roman Pula. It is in the center of town, in the northeastern part of the old town, close to the port, and its condition is incredible. It is an amphitheater that was constructed in the 1st century of grand dimensions, when it was created it was able to hold over 20,000 spectators. This is a structure that was built completely of limestone. The outer wall is what is best preserved and is over 30 meters high. You can see perfectly the 2 rows of 72 arches that make it. The problem with this amphitheater is the inside, as it offers nothing new, so you could be disappointed.

Old Roman forum with lots to see inside. Handy for the city of Pula too