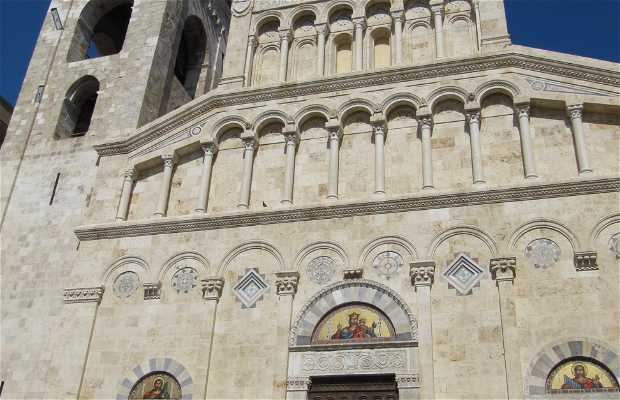 Sanctuary of the Martyrs

For me, the interior of the St. Mary and St. Ceclia Cathedral in Cagliari is one of the most amazing places in the entire city. The polychromed marble interior creates some truly beautiful images which evoke the majesty of Siena Cathedral (despite the distance between the two, of course). The interior is shaped like a Latin cross and has three naves and various lateral chapels. At the entrance, there are two wells of holy water dating back to the 17th century. The flooring, re-built in 1956 according to the original 17th-century design, is also made of polychromed marble. The vaults of the main nave have frescos depicting the exaltation of the cross, the history of Christianity’s spread through Sardinia, and the Piety. All were done by artist Filippo Figari (1885-1975).

Cagliari Cathedral is located in the upper part of the city, in the old quarter known as Castello. The Baroque-era facade was restored in 1925 in a more Romanesque style. Inside, there are two ancient pulpits that are not well-integrated into the modern cathedral and are now a museum containing truly remarkable sculptures. The marble lions on the steps of the choir are not the most beautiful of Sardinia; however, I really liked the crypt which houses the tombs of the Princes of Savoy.

Situated in the historic district of Castello, this church is dedicated to the Assumption of the Virgin and Santa Cecilia, being elevated to cathedral status in 1258. In the Cathedral, made in the 13th century, we can see the baroque style of the 17th and 18th centuries and the strange facade in the Pisan Romanesque style, which was constructed in the early 20th century.

Cagliari Cathedral is one of the landmarks of Castello, the historic center of Cagliari. It was originally built in the 13th century and, given its position between other houses, doesn't really stand out at first glance. Despite only the façade being visible from the outside, the cathedral is worth a visit. The façade is done in the Romanesque-Pisan style and decorated with mosaics. Inside, Baroque is the overriding style.