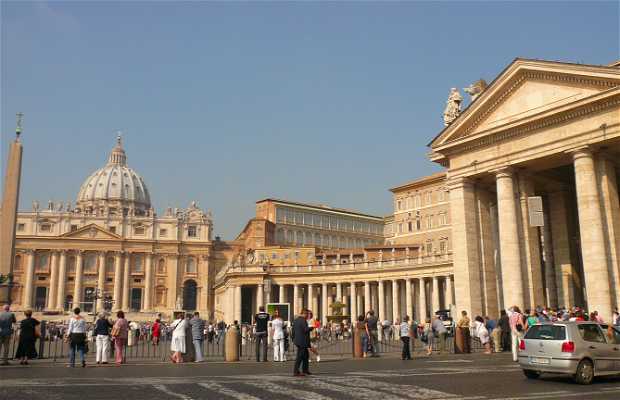 The scale of the Basilica

With its staggering dimensions and finishing touches by Bernini, the facade of St. Peter’s Basilica represents a perfect combination of harmony and majesty. Perhaps its greatest aspect is the cupola by Michelangelo. In the past, it could be seen for dozens of kilometers in any direction. The dimensions are such that various people could sit comfortably on top of the ball which tops the dome. You can actually go up and visit the dome but the lines are rather long and you have to pay. The views, though, are worth it.

St. Peter’s Basilica wasn't built on a human scale, but rather a divine one.

Immensity, grandeur, art, respect, worship…these are a few of the words that come to mind when pondering St. Peter’s Basilica. Every corner is full history and detail. You can also climb to the dome of St. Peter’s Basilica from Monday to Saturday, 08:00 to 18:00, for 7€ on an elevator or 5€ taking the stairs. With the elevator, you must climb 321 steps and without it some 521 steps. Most of it is made up of spiral staircases. You can also visit the Papal Tombs if you want.

When I first stepped into this magnificent church I was thankful for the coolness that the ancient stones provided. As I gathered my thoughts I began to explore and wander around--somehow leaving my family temporarily as I always seemed to do. The silence was so thick that you couldn't even use the ol' cliche butter knife, but rather a machete, to cut through the silence. But then again, why would I disrupt such a thing?

For this was a comforting silence, one that enveloped you like a blanket rather than smother you. I was lost in thought and so were the people around me, whether or not they were religious thoughts seemed irrelevant. We were all basking in the presence the church gave us. Light pooled in from the windows gently touching the individuals who walked where the rays hit. The church and the people seemed to breathe in unison--taking deep, even breaths. The church was alive and so were we. The stones had a pulse and so did our hearts. The room breathed every time a breeze floated into the room, and so did our lungs. The light touched the room, illuminating it and so did our souls.

It is a very beautiful place

Impressive. A must visiting Rome. Be careful of the long lines.

Impressive. A must visiting Rome. Be careful of the long lines.

Never ever miss this place: the Balisica has an incredible structure and you seriously can’t stop looking at everything.

Is a most in life.