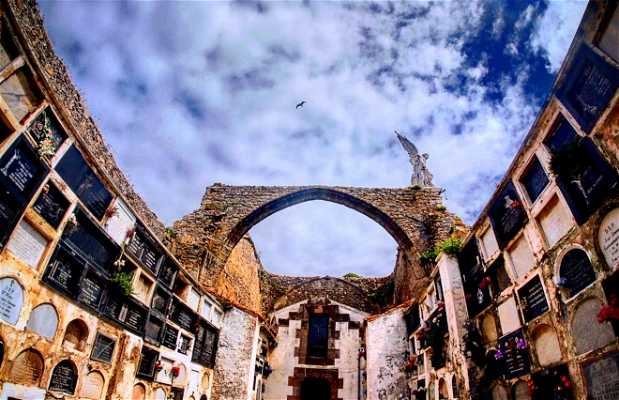 84 photos of Cemetery of Comillas

27 reviews of Cemetery of Comillas

A very different kind of cemetery

Although visiting a cemetery might seem strange, this isn’t your average graveyard. It’s located in the highest part of the town of Comillas and offers one of the best panoramas of the entire coastline.

Inside, there’s a parochial church dating back to the 15th century and numerous Gothic ruins. What strikes your attention most of all is the statue of the Angel of Death (by the sculptor Llimona Bruguera) looking out over the Cantabrian sea.

Another highlight is the Modernist facade which was declared to be a Monument of Cultural Interest in 1983.

When I saw this cemetery for the first time, I loved it. It was just…different. Not only because it looks out over the sea but also because it gave the sensation of being in ruins but at the same time beautiful.

Later, I found out that it had once been a church that was abandoned. After being abandoned, it was converted into a cemetery. After a few centuries, it had to be expanded, a project which was led by Lluís Domènech i Montaner in 1893. The sculptor Josep Llimona created the Angel of Death statue (dated between 1894 and 1895) which stands over the ruins of the old church.

This spectacular cemetery is in the middle of the city. It was the old church and has now been converted into the town cemetery. A white angel, the angel of death, presides over the place and seems to ensure the soul of all living and dead, watching over everything and everyone there. It is the work of Josep Llimona. Inside the place, the Piélagos family mausoleum is the highlight.

Lists and places related to Cemetery of Comillas

Information about Cemetery of Comillas