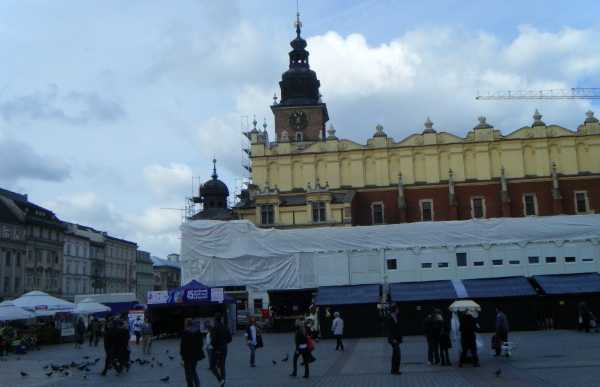 It was an amazing journey. Some friends and I were coming from Poznan, another Polish city. I was surprised by the beauty of this city, its old buildings and the pleasant people. You cannot see the interior, but in a small chapel next to it, you can find buried there a Polish president. Great and highly recommended.

7th of January – 9th of January 2014: We went to Krakow with bus from Vienna. On the first day we arrived, we did 2 free tours. The first one was about the Old Town. We started meeting in front of the St. Mary`s Church, where you can hear on every hour, a trumpet signal—called the Hejnał mariacki—being played from the top of the taller of St. Mary’s two towers. The plaintive tune breaks off in mid-stream, to commemorate the famous 13th century trumpeter, who was shot in the throat while sounding the alarm before the Mongol attack on the city.

After this, we head to the St. Florian’s Gate, one of the best-known Polish Gothic towers, and a focal point of Kraków’s Old Town. It was built about the 14th century as a rectangular Gothic tower of “wild stone”, part of the city fortifications against Turkish attack. We saw the Main Market Square, which is the principal urban space located at the center of the city. It dates back to the 13th century, and at roughly 40,000 m² (430,000 ft²) is the largest medieval town square in Europe. The Project for Public Spaces (PPS) lists the square as the best public space in Europe due to its lively street life. There we could see the Adam Mickiewicz Monument, one of the best known bronze monuments in Poland, and a favourite meeting place at the Main Market Square. Our guide also told us that before the final exams to enter in a university, the students of Krakow jump around the monument to bring luck. She also did the same on her early days. In 1940 the monument was destroyed by the Nazis following German invasion of Poland. It was not to be seen in the Square until its restoration in 1955. However, most of the figures were recovered from a Hamburg scrap metal heap in 1946, which allowed the restoration of the Monument’s original appearance.

Lists and places related to Krakow

Links to Krakow
Hotels near Krakow Cities in Krakow
See something odd?