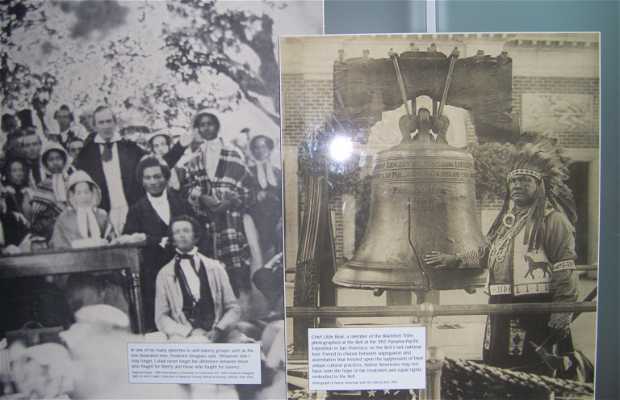 "Proclaim liberty throughout all parts of the land unto all the inhabitants thereof." This is a fragment of the inscription on what is perhaps one of the most famous bells in the world, which wasn't known about it initially. The Liberty Bell is in Philadelphia, and was initially created to commemorate the 50th anniversary of the Charter of Privileges by William Penn. But it was his special touch on July 8, 1776 by calling on citizens to hear the Declaration of Independence of the United States, which became a symbol of independence, freedom and the end of slavery. It is said that this later came to be what is now the United States, where all those men who wanted to create a democracy met. There was Benjamin Franklin, one of the drafters of the U.S. Constitution and Governor of Pennsylvania (Philadelphia is in Pennsylvania). Since 2006 there has been a pavilion located in Independence National Park, but throughout its history it has been leaning from side to side and has undergone several accidents, including the punishment of a U.S. citizen who wanted to protest this and was sentenced to prison. The crack has is the memory of all those war wounds. Today you can visit free-after passing a comprehensive and personal control of any type of bag you carry. It is in a small pavilion where different panels tell their story and give details of all the famous people who have passed through it, as the Dalai Lama. And, if it's closed, on one of the sides there's a panel with a ton of buttons that you can press to hear stories in different languages. And because everything is glass you can see the bell from where you are.

The Liberty Bell Hall is a media center dedicating to maintaining the bell and preserving its history and symbolism. I recommend that you get there early to avoid the long lines, which sometimes surround the entire building! The video that explains the bell's history is very interesting and touching. I was struck by the image of a child in Central America who cried after getting his chance to touch the famous bell.

The Liberty Bell is an important symbol of freedom for Americans. This large bronze bell sounded after the country's Declaration of Independence in 1776. It is located in the Liberty Bell Center in Philadelphia between Independence Hall and the National Constitution Center. A detailed history of the famous bell can be learned inside the building by reading the panels and watching the videos. There's a large crack on the bell which is currently undergoing repairs. The building is small but very often full of tourists. Each state actually has a smaller replica of the bell which speaks to its importance

If you like history this is a good place for you

I just love the history

Coming to Philadelphia and not come to this place is impossible! So many historic events took place in here! I just love the history and culture behind it.

Amazing place of history, the start of freedom as we know it