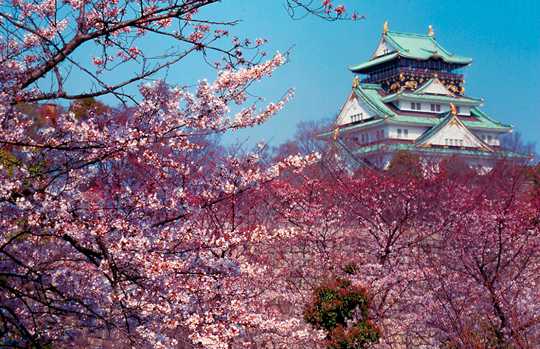 First built in 1583 by order of Toyotomi Hideyoshi, Osaka Castle is one of the most characteristic monuments of Osaka. However, with his death in 1598, Tokugawa Ieyasu, while ambitiously trying to become the new Shogun, attacked the castle and virtually destroyed it. Thankfully, Tokugawa Hideata commissioned to have it rebuilt in 1620. The 1665 fire badly damaged the castle after it was hit by lightning. In 1931, its iron-based reconstruction was begun and since 1997 there has been major restoration work which is not yet completed. I recommend visiting in April so you can see the sakura that grows around the moat surrounding the castle.

My favorite part of the world!

We toured Osaka Castle, walked around the structure and simply admired the site. I couldn't believe my great fortune to FINALLY be stepping foot at the site I'd dreamed and longed to see since I was just a small young kid. It was just amazing, and I can't WAIT to go back and enjoy my time in Japan again. Also, yes... return to this iconic castle once more to admire it's beauty and elegance, once again.

The view is just great from the top of the Osaka castle. The museum inside is also pretty interesting.

In one of the upper floors, they got kind of little movies to show the history. It's pretty classic. You can even dress up and make photos for 500 yen more. you also get a photo from them.