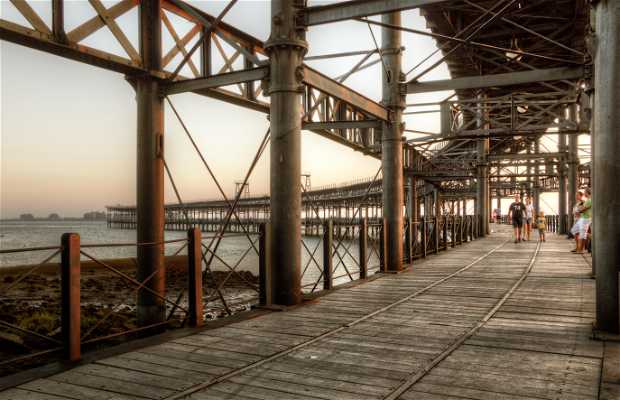 A Nice Sunset in Huelva

It is a beautiful place to see the sunset in Huelva. It is a place used by wedding photographers, gangs of teenagers, loners, but above all it is a place for couples and fishermen, although who knows what they get out of these waters. It is a nice walk. A touch of beauty in an area that is otherwise quite ugly, industrial and unattractive.

After visiting the “British Legacy” of the Interpretation Center “Huelva, Puerta del Atlántico” (Huelva, Gate to the Atlantic), I had to visit one of the most important legacies: the Muelle Río Tinto, which has been named of Cultural Interest.

What is it? It is a work of engineering constructed by the British company Río Tinto Company Limited. It is the end of the railway line that brought the mineral extracted in the mines of Río Tinto to the capital, and where the merchandise was shipped.

What does it look like? It was designed by Sir George Barclay Bruce and Thomas Gibson between the years 1874 and 1876, following the guidelines of the Eiffel Tower. It is a metallic structure, built in wood and iron, with two levels. It has a length of 1.165 meters, 500 of them go inside the Odiel River.

A place located in the capital of Huelva, calm, far from downtown. It is ideal to be by yourself and reflect on things, but it is also nice to go with your people, talk and enjoy incredible views…

It is a place where you can disconnect from city life without leaving it. To walk there is to relive the history of Huelva through this old bridge that represents the British legacy.