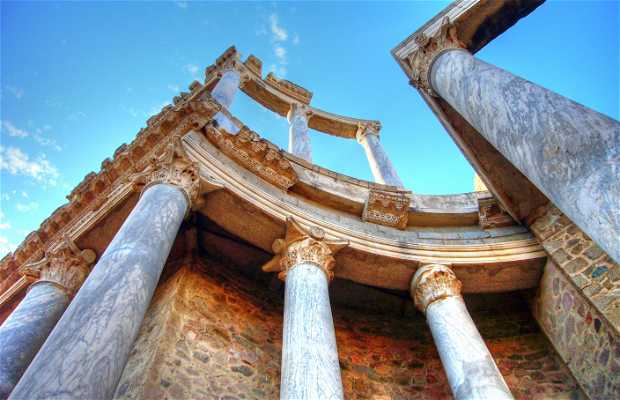 729 photos of Roman Theatre of Mérida

93 reviews of Roman Theatre of Mérida

If Merida is known as a place filled with Roman culture, a special mention must be made to the Roman Amphitheater.

I think this is without a doubt the most beautiful place in the city for many reasons. First of all, it’s just magnificent. It’s enormous from all angles. One of the best parts about visiting is that you can step on the ancient stands and take a seat. It’s important to keep in mind that we’re talking about a still-living place where they still perform plays. For example, when I was there, there were flyers for an upcoming Isabel Pantoja concert.

But the most special thing about the place is that it has been absolutely splendidly conserved. I mean, come on. They say it’s from 16 A.D. It’s hard to believe that looking at the great state it’s kept in.

The Theater of Mérida is the “Prince of the emeritus monuments” according to Menédez Pidal, architect that directed its reconstruction in 1964. The excavations began in 1910. The theater had stands built to hold 6,000 spectators. The stands is (and was) divided into three sections, separated by small walls, in respect to the ancient class differences.

Although all that have attended Mérida’s Theater Festival know that the acoustics are better in the higher seats. Thanks to the festival that has been celebrated every year since 1933, it’s the only building that has been able to serve its original purpose after restoration. The stage is simply incredibly, decorated with statues of the Goddess Ceres, Pluto, and Proserpina.

A marvel from the Roman era

Who hasn’t heard about the Roman Theater in Mérida? Who hasn’t studied it when we were young? Méida, in the Roman ages was called Emerita Augusta and the construction of this marvel was brought about by Agripa.

The theater was proclaimed a UNESCA World Heritage site in 1993. As you can see in the pictures, it consists of a semicircular grandstand that has the capacity to fit 6,000 people.

And the most impressive thing is that the stage is made up of two columns following the Corinthian style with marble cornices and plinths.

Aside from this, if you want to see the theater in action, don’t miss the Theater Festival in Mérida.

This Roman amphitheater is in Mérida and is located alongside the Roman theatre, both of which are found in a closed area containing all of the monuments in Mérida with the exception of the museum. A 12 euro tickets gives you access to all the sites, and in winter, the afternoon visiting hours at 4pm through 6:30pm.

+14
Like
Have you been here?
Add your opinion and photos and help other travelers discover

Lists and places related to Roman Theatre of Mérida

Information about Roman Theatre of Mérida