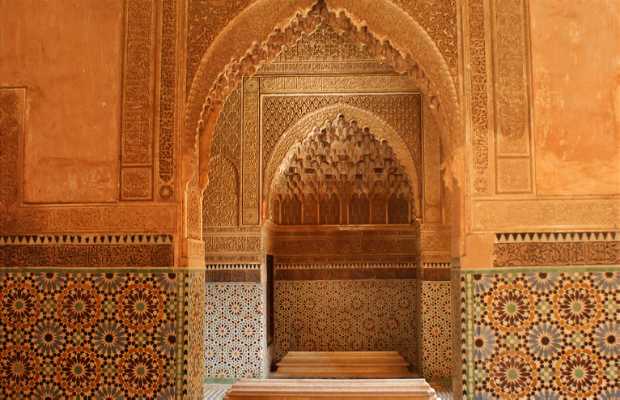 A Precious Hidden Mausoleum between Buildings

One of the most interesting sites in Marrakech are the Saadian tombs, discovered in 1917. They are hidden behind a wall and at the same time, behind several buildings in the city, including the Kasbah Mosque, which was at one time its only access. Its entrance is from the street through a narrow alley, which after having entered, you discover a beautiful complex of gardens wherein lay the graves of soldiers and servants, as well as 3 rooms, which house the tombs of the royal family from the Saadian dynasty.

The most famous of the rooms is the Hall of Twelve Columns, which contains the tomb of the son of Ahmad al-Mansur.

The Saadian Tombs are the final resting place of one of Marrakech's earlier dynasties. It's located in the south-central part of the city near the Bahia Palace, El Badi Palace, and Dar Si Said, as well as the Mellah and Kasbah neighborhoods, all of which should be on your list of things to see. I'd suggest doing a route first thing in the morning.

Amazing and peaceful part of the city. If you’re are tired and stressed enter here and take a breath.