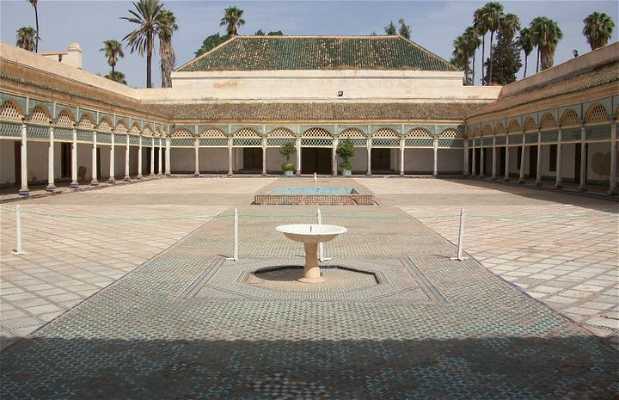 The Bahia Palace, in my opinion, is the most spectacular official monument to see in Marrakesh, even ahead of the Ben Youssef Madrasa. I'm not much of a history buff to be honest, so I can't tell you much on that end, but I can tell you that the French colonists found it so spectacular that they booted out the previous owner and installed their local offices there during that time. Nowadays though, it's a museum and one well worth visiting, especially when the entry fee is little more than a dollar.

The highlight here are the intricate wood engravings on the ceilings, many of which border on mind-blowing in terms of ornateness. The austere palace courtyard was another highlight. Apparently, it was once used to hold prisoners begging for forgiveness. The emir would make them wait in the hot sun for hours on end in the patio to beg clemency. It's a really beautiful place and at the top of my list during my visit to Marrakech.

The city's recent history can be seen in this palace, which was built in 1880 in Andalusian style. Its construction, which was supervision by an architect of the Andalusian school, was fully funded by the Grand Vizier Si Moussa and completed, seven years later, by his son Ba Ahmed. It shows a variety of styles, a result of continued expansion, but a wide-spread oriental atmosphere unifies the interior of this authentic maze, consisting of 150 rooms, all with cedar ceilings painted or inlaid, marble flooring and cladding made by wall tiles from Tetuan.
In its heyday, the four women and the 24