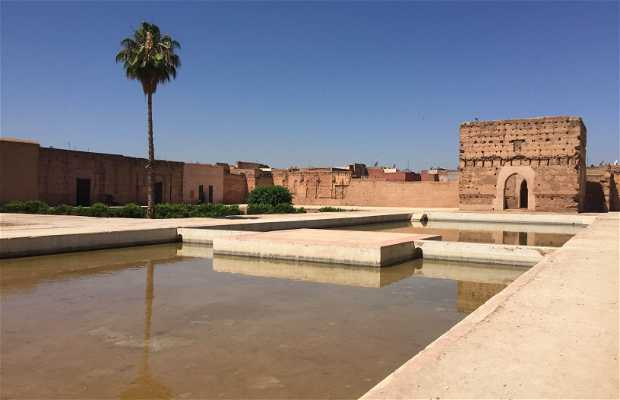 A definite stop on you Marrakech tour

El Badi Palace is a wonder that once was. Apparently, it was once covered in gold, inlays of ruby and turquoise, and intricate tile-work and sculptures. During a sacking of the city centuries ago, all of that was stripped and the palace today is a mere skeleton of what it once was. But that's not to say that it's not without its merits.

The main courtyard, with its enormous reflecting pools is a sight to behold. But the best parts are definitely the underground catacombs and cisterns, and the terrace. First the underground: it's a welcome break from the heat and pretty neat to go wandering through the various corridors, halls, and rooms that are hidden there below. The terrace, on the other hand, is hot and sunny but offers some of the best views of the rooftops of the Mellah and Kasbah districts of Marrakech as well as of the courtyard itself. It's not the most spectacular thing in Marrakech, but it's near the Bahia Palace, Dar Si Said, and the Saadian Tombs, and hey, it's only $1 to enter, so it's well worth it.

Near the defensive wall and a little bit ignored in guide books was the surprise of the journey. Very interesting and beautiful palace.