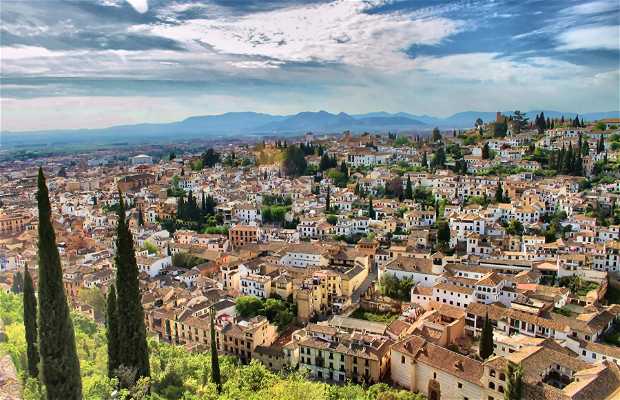 The sentence that might best describe Granada is "There is no greater misfortune than being blind in Granada" and the trendiest touristic slogan comes from the ex-USA president Bill Clinton, declaring that the sunset from Albaicín is the loveliest in the world.

I recommend visiting the Alhambra early in the morning and going in the late afternoon to see the sunset from the Mirador de San Nicolás in Albaicín then continuing on to Sacromonte, the neighbourhood of the cave-houses and the art of "zambra", the music and dance of Arabic origin which is typical there.

The Albaicín preserves much of the original urban physiognomy like various other medieval constructions. The three elements possess a complementary value to the whole and succeed in creating a unique and universal significance.

A walk through Albaicín

The neighbourhood of Albaicín is without doubt one of the places you shouldn't miss out on if you go to Granada, there is a good reason why it is classified as World Heritage site. The word Albaicín has various meanings, to us the one closest to the truth is "uphill district” it is why we chose to make the climb by the minibus which leaves from the bus stop next to the Isabel la Católica (Queen Isabel) monument .

It took us to the centre of Albaicín, the Arch of las Pesas (weights), a gate separating the neighbourhood of Albaicín and that of the Alcazaba (citadel), which houses various archaeological Iberian, Roman and Muslim remains. The cistern of Trillo was the first cistern we visited, although we didn't have time to visit all of them of course.

The Albayzín area of Granada is the oldest and most charming part of the city, consisting of over 3,000 small winding corridors, some not more than a meter across, which spread across one of the hills in central Granada. The Albayzín charm is really threefold: 1.) the views, 2.) the culture, 3.) the look.

The views from the Albayzín, especially those of the Alhambra, are spectacular, not surprising considering the famous San Nicolas Viewpoint is found there. The cultural aspect of the Albayzín is also interesting: the neighborhood is a protected UNESCO world heritage site and as such, all constructions are limited. Here, you won't find any McDonalds or H&M's, just traditional buildings built in accordance with traditional methods and materials. The neighborhood has a bohemian vibe, with quirky restaurants offering cheap tapas and cañas, street vendors hawking wares in the squares in the mornings, Moroccan-inspired shops, and the occasional flamenco guitarist serenading a fountain-lined plaza.

Lists and places related to The Albayzín

Links to The Albayzín
Hotels near The Albayzín Neighborhoods in Granada
See something odd?