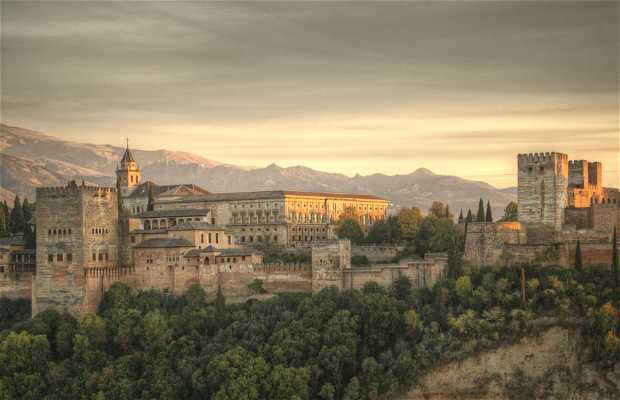 Although the ascent might be a little harsh, it is worth walking the Paseo de los Tristes (The Path of the Sad) until the higher part of Albaicín. A magical neighbourhood, full of mystery, almost a village in the middle of the mountains which looks upon the Alhambra and the snow-capped mountains.

And in the higher area there is the view of Saint Nicolás. A raised area at the feet of a church from where there is a magnificent view of the Alhambra with the Sierra Nevada in the background. Additionally, the craftsmen of the area take it as an opportunity to offer all sorts of craft (necklaces, earrings, rings, ashtrays, puppets and a great variety of products) because every visitor to Granada has to go up there. They are not annoying nor insisting so the charm of the place is preserved, they even contribute to it.

How to get there

To get to the San Nicolás viewpoint, forget the car. You have two options: walking or taking the minibus of Granada urban transportation (line 31). Of course, if you go to Granada, this is one of the places you must visit, to behold the most beautiful view of the Alhambra.

You can take the bus at Plaza Nueva or Gran Vía de Colón, but apparently there are building works in the neighbourhood of Albaicín and the bus cannot stop at Plaza San Nicolás, so one has to get off at Iglesia San Salvador and the bus driver will give directions, above all to any foreigners traveling on the bus. I recommend taking a map of Granada so that you don't get lost, even though it is not too difficult to get there because there are various signs indicating the direction. I walked up there last time from Plaza Nueva (last year), with two friends from Granada, a beautiful walk, I highly recommend it if you have time. I descended walking both times, until arriving at Puerta Elvira.

Watching the Alhambra for hours...

Right in the centre of the citadel of Albaicín, admiring the Alhambra from the San Nicolás viewpoint can be an activity that takes hours. One comes with “tourist syndrome"... "See what there is rest a bit and go again", but this square has something magical that makes time fly.

There are all types of people, most of them bohemian hippies interacting in the most diverse ways, playing the guitar, singing, lending the guitar to each other, selling bracelets... Everything in an incredible atmosphere of peace.

The last time we went we stayed three hours on the square, three hours admiring the Alhambra, listening to songs and drinking granizados (slush puppy)...

You don't want to leave

The Alhambra is one of the hallmarks of Granada, which all travellers want to see when they come to the city. From the neighbourhood of Albaicín there are many points from which you can see this imposing building, one of them is the Mirador de San Nicolás. If you go until the end of Carrera del Darro (better known as Paseo de los Tristes), right in the centre of Granada, you arrive at a square that is right at the feet of the Alhambra. But this view is even better if you go up to the Albaicín. About 15 minutes up the Paseo de los Tristes, or up Calle Calderería Nueva (the tea-rooms one), is the Mirador de San Nicolás, maybe the most popular in the city.