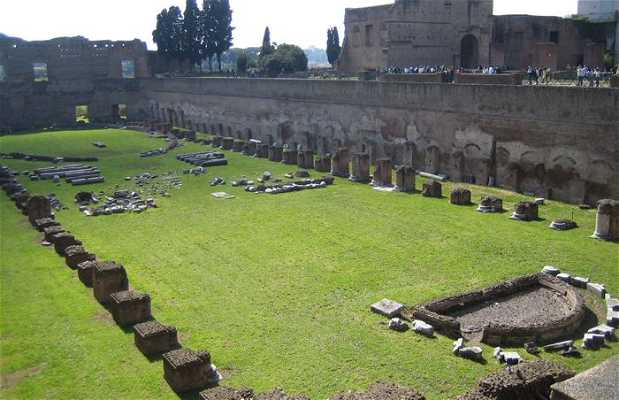 The cradle of Rome

This is surely the most famous hill in Rome and where the city's first inhabitants settled more than a thousand years before Christ. In fact, it's known as the birthplace of Rome. According to legend, in 750 BC, Romulus and Remus founded the "Roma Quadrata." Legend also states that it was in the Palatine Cave where the she-wolf, Lupercal, famously suckled the twin founders of Rome.

Today, you can see countless remains of imposing buildings built during ancient times. Although the whole complex is impressive, these are some of the places that deserve special attention:

- Flavian Palace: The Domus Flavia is splendid palace was built in the year 81BC by the emperor Domitian as an official and public residence. Today, you can still see some parts of the extensive palace.

On Palatine Hill in Rome, the palace of Severus is connected to the Hippodrome of Domitian.
This is a structure that looks like a Roman Circus and bears the Greek name for arean, but appears to be too small for chariot races.

You could describe it better as a Greek-style arena built for foot races. That's my guess at least...its real function is still a source of debate. One thing for sure is that they used it for sports events in the times of Severus, but it was probably originally built as a garden. According to the guide from the Sopraintendenza Archeologica di Roma, the majority

One of my favorite places in Rome

Palatine Hill is a complex of beautiful ruins and homes in very different states of conservation. In fact, it's hard to make out the identity of some of them. If you go in a purely ruin-seeing mindset, the forum, hill, and museum together can get a bit heavy-going. I’d suggest taking a break and just enjoying the charm of the place. Personally, I enjoyed it more when I put aside the audio guide and followed my intuition to the places that seemed most evocative. It's a painter and photographer's paradise. The layout of the ruins has an indescribable vibe what can only be sensed and not described by data, dates, and artistic styles.