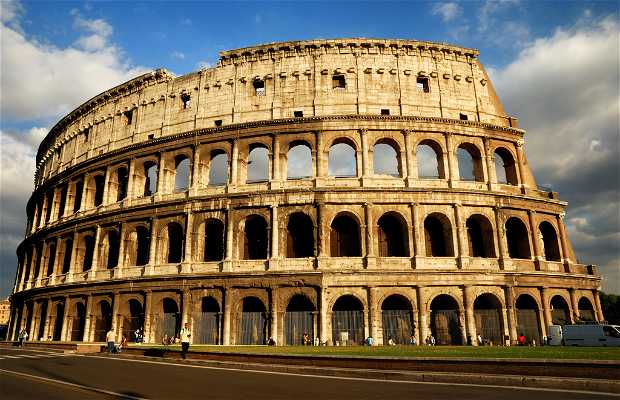 The Colosseum is definitely one of Rome's main tourist attractions and is considered one of the 7 wonders of the world. It could hold 40,000 seated spectators (and another 10,000 standing), making it the largest theater in the entire Roman Empire. It was built between 72 and 80AD by the Flavian emperors, to whom it owes its original name: the Flavian Amphitheater. The name Colosseum comes from the gigantic Colossus of Nero statue nearby which, sadly, is not standing today. The Emperor Titus inaugurated the Colosseum during a celebration lasting 100 days.

The spectacles were meant to be a form of public entertainment. Admission was free and the cost of running the events was bore by the Empire. Seating was according to social class, with the aristocratic class seated near the front and lower classes in the higher seats. There were public executions, animal hunts, dramatic plays, and all kinds of gladiator battles.

The Colosseum is one of the most famous monuments from antiquity due to its architecture, current condition, and history. It was declared a UNESCO World Heritage Site in 1980.

In its day, it could hold over 50,000 spectators in 80 rows of seats, all there to behold gladiator battles and other public spectacles. Its inauguration lasted a full 100 days and the whole of Rome took part. Dozens of gladiators and beasts lost their lives in the name of the pleasure and entertainment of the masses of Rome.

The building fell into disuse in the High Middle Ages. It was later used as a shelter, factory, fortress, quarry, and even as home to a religious order. Many of its stones were taken and used in other buildings until it was finally converted into a Christian shrine in honor of the martyrs from the early years of Christianity.

An interesting way to visit the Colosseum is with a guided tour that explains the origins, history and many interesting anecdotes that help give you another point of view on this modern marvel. For the tour you get a "walkie-talkie" with which you can easily hear what guide says (so no need to stay with him to hear what he says) and you can walk around seeing the coliseum's most interesting points. While we waited for the time we were assigned, we could browse the exhibition which is located on the first floor. There were panels and models, all quite pleasant, which explained the history of the

Go in the morning

There is no more to say about the Roman Coliseum because it's virtually all been said. I simply advise you to go in the morning, half an hour before it opens to see the Colosseum without people - it's a gift that few can appreciate, especially when you see the sun coming through their holes, it's very good material for photos. I was there very early and the truth is that throughout my visit, which lasted an hour and three quarters, I took the best pictures of empty building. When I left this it was filling up.

They freaking simulated sea battles in there and also fought lions and other sorts of animals for people's joy, no need to say anything about this place except it is awesome.

This is such an amazing place

You feel far away from home and you never get tired of it (and if that happens, don’t worry: there’s a fountain with free water near the metro’s entry, you can even choose between soda water and regular water); I love sitting down the stairs of Colosseum and just close my eyes with sunrise in the sky.

When you behold this 2000-year-old structure, it leaves no doubt as to why it's considered one of the 7 wonders of the world. There is no other monument which so evokes the grandeur of the Roman Empire. It has eighty entrances, four levels, and could hold upwards of 50,000 people.

The first time you lay eyes on it, you'll be surprised by its size: 57 meters tall, 188 meters long, and 156 meters wide. It costs about $10 to enter and it's totally worth it if you have the time. You can see the intricate system of passages that were used by the gladiators and animals. It was originally called the Flavian Amphitheatre in honor of the Imperial family who ordered its construction. The name Colosseum wasn't used until long after and was in reference to the 37-meter statue of Nero (The Colossus of Nero) which stood nearby. The only trace of this statue is the pedestal which is just west of the Colosseum.

Lists and places related to Colosseum

Links to Colosseum
Hotels near Colosseum Historical Monuments in Rome
See something odd?