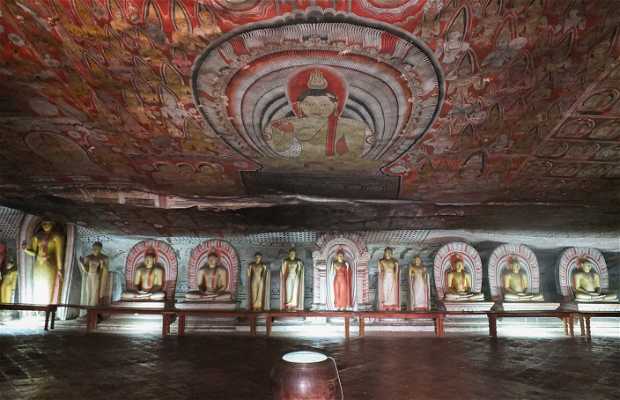 71 photos of Cave of the Great Kings (Maharaja Lena)

3 reviews of Cave of the Great Kings (Maharaja Lena)

The 2nd cave of Dambulla

The Cave of the Great Kings (also known as the Maharaja Vihara) is the second and most spectacular of the caves at the Dambulla Cave Temple, or Golden Temple, complex in Dambulla, Sri Lanka. Legend has it that the cave was originally built in the 1st century BC by the King Vittagamini Abhaya (thus the name), but the majority of its fine and famous frescoes were added in the 1700's at the behest of the kings of Kandy.

The cave is over 50 meters long and contains over 55 separate Buddha statues as well as representations of Hindu deities Saman, Vishnu, and Ganesha, a common occurrence in the melting pot which is Sinhalese Buddhism. Rather than drone on about the history and technical aspects of the cave, I just want to focus on the frescoes, which are one of the most incredible things I've seen in all my travels. The entire cave ceiling is covered in ornate and detailed frescoes outlining everything from the Buddha's birth to his temptation by demons to his attainment of enlightenment, and every nook and cranny in between is filled with beautiful geometric designs. The frescoes are remarkably well-preserved and still retain their eye-popping colors (so, no flash photography, please).

Cave of the Great Kings

Dambulla Temple consists of five caves turned into small chapels of Buddha worship. The second cave is the biggest cave and it is called the Cave of the great kings. There are 16 important standing Buddha statues and 14 important statues that are standing. There are also plenty of smaller statues within the cave. The pilgrims would leave offerings of fresh flowers and food, and sometimes also leave a small statue of Buddha or Vishnu, the Hindu god. The ceiling of the cave is covered with murals depicting the life of Buddha, and date from the eighteenth century. Men have used the cave since 2700 years ago.

Information about Cave of the Great Kings (Maharaja Lena)