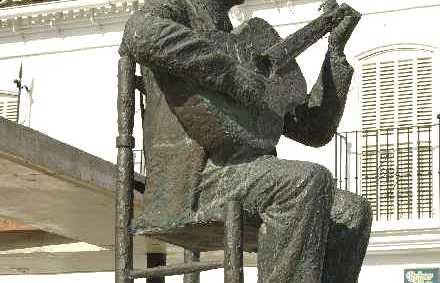 6 photos of Monument to Juan Breva

1 review of Monument to Juan Breva

Next to Teatro del Carmen in Velez-Malaga, is this bronze monument dedicated to the memory of Antonio Ortega Escalona, ​​better known as "Juan Breva", and certainly the greatest singer in the history of the province of Málaga. In Madrid, he sang every night at three different cafes (El Imparcial, Barquillo and El teatro Príncipe Alfonso) and had a clause in his contract requiring that his performance had to be paid in gold. When he was called to sing before King Alfonso XII in the palace, the king paid him with gold pins or cufflinks. The poets Ruben Dario and Federico García Lorca wrote poems inspired by him and his singing.

Lists and places related to Monument to Juan Breva

Information about Monument to Juan Breva