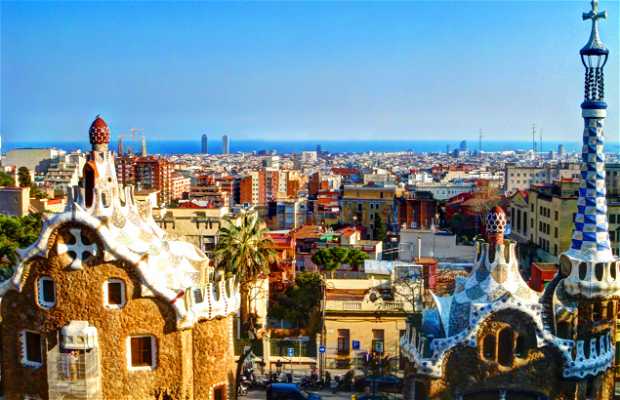 Completed in 1914, Park Güell is one of the most important and beautiful works by the well-known Catalan modernist Antoni Gaudi. Along with his Sagrada Familia Cathedral, Park Güell is a symbol of the city of Barcelona and was been declared a UNESCO World Heritage Site in the 1980's.

Perched atop a hill and offering unbeatable views of both the city and sea, Park Güell was originally conceived as an urban project between Gaudi and the wealthy industrialist Eusebi Güell, a fact evident in the park's spaces for washing, markets, and public events.

A good panorama of Barcelona

Güell Park is a great garden with grand architectural elements located in Barcelona. It was designed by Antonio Gaudí, an important Catalan architect and one of the greatest exponents of modernism. Along the whole park, Gaudí's style is displayed. Everywhere you find incredible color mosaics or columns of incredible shapes, all perfectly in line with the gardens around.

Walking in the park is really incredible, and it is a great place to have the perfect panoramic view of Barcelona. The only drawback is that to get there I recommend taking a taxi, because the walk there is quite harsh

Located in the outskirts of the city, close to the Tibidabo, the park was built under the supervision of Eusebi Güell, between 1900 and 1914, and was inaugurated as a public park in 1922. An example of Gaudí's naturalist period, this magical spot of 17 hectares radiates forms of baroque tendencies, displaying the artist's boundless creativity and imagination.

Gaudí not only designed the architecture of the park, the winding paths, the fantastic buildings and the great open spaces with wonderful columns, but he also decided which plants and trees to include. Walking through the Güell park

How to get there without dying because of the hills

I lived close to Güell park for a year and almost every Sunday I would go uphill to take a walk and read the newspaper in the sun. Walking in this park is a great experience. People should know it is possible to get in public transport without nearly killing yourself and walking up the hill. As far as I know there are three options:

1- By subway until VALLCARCA (Line 3, the green one) and it is well indicated from the metro station. There is a very steep street with mechanical stairs. This entrance is located on the side of it, very close to the Tres Cruces, highest point of the park with stunning views of Barcelona. From there you can go downhill to the most famous area next to the main entrance.

Park Güell it’s a big park not very much near the centre of Barcelona!

But it’s really good! Unfortunately I couldn’t visited the monumental part (the most visited part of the park) because was sold out (I recommend to book the entrance minimum a week earlier). This park offers a nice view to the city!

Nice place where you can see whole city of Barcelona. If you get there earlier than 8am, it is free.

I was in Barcelona in April 2013. It was a lifelong experience. I visited Barcelona's most famous points, buildings, I was also at Camp Nou, I saw play my beloved team.