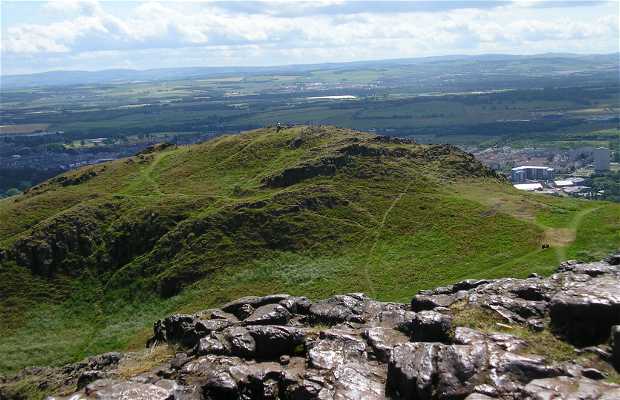 Next to the Palace of Holyroodhouse, covering a land of 260 hectares, with a rocky hill 225 meters high, you will find the place called Arthur´s seat or Arthur´s chair. It is an extinct volcano from 350 million years ago. Holyrood's name comes from the time of David I, when in 1128 was knocked off his horse by a deer while hunting. According to legend, a cross appeared miraculously on his hands to ward off the animal. In gratitude, the king founded the Abbey of Holy Cross. If I had had my slippers, I would have climbed to the top because it appeared to be miraculous. If I had gone, I would have also given a candle to the Virgin.

The best views of the city of Edinburgh can be found near the Holyrood Park, up a steep path that begins in front of the Palace of Holyroodhouse. Holyrood Park is an area of 263 acres that was once a hunting field for royalty. Today it brings a touch of fresh air and greenery to the city. The highest point of the park, Arthur's Seat, is a 251m hill which is also a long-extinct volcano. Walking from Holyrood, where you can park your car, to the top, takes 45 minutes. I recommend that you take a walk here, as the views are spectacular...from the Palace of Holyrood to the old town of Edinburgh and

It is a place where you can lose yourself in nature

Arthur's Seat is an extinct volcano which is more than 350 years old, located in the heart of the city of Edinburgh. This hill of 250 meters is surrounded by cliffs at the summit, but you can still access it on foot after a short 15 minute walk. It is a place where you can lose yourself in nature.

I enjoyed a lot

The air was really fresh and even the path was tough.

The view of all the city is stunning but cover yourself because on the top is very cold!

Such a unique and awesome place.

When you get on the top, you feel as in a romantic painting.

Fantastic views from this high point in the city. Be sure to wrap up warm on a not so sunny day

Very beautiful and the view over Edinburgh is amazing.