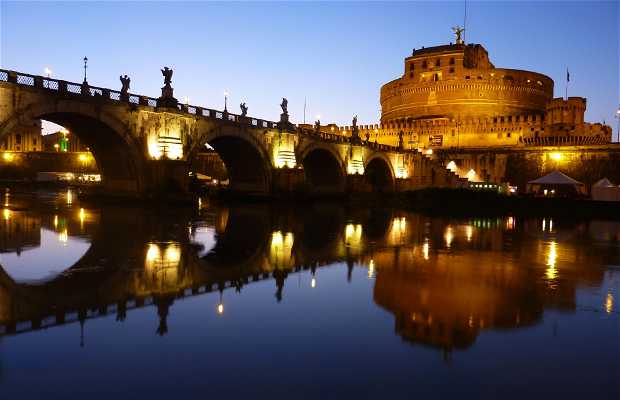 I don't know if it's a blemish on a city with so much beautiful art or if I should take it as another piece of history that's worth investigating. The emperor Hadrian decided that he wanted his remains buried in a garden that had long belonged to the imperial family and joined the garden to the land with a bridge known at the time as Elio. If you visit the interior, specifically the Treasure Room, you'll be in the heart of the mausoleum where the remains of the emperor were buried. Emperors continued to be buried there up until Caracalla, the last emperor to be buried there before the building was converted into a fortress.

The Mausoleum of Hadrian

A legend surrounds this castle. Building began by Hispanic Emperor Hadrian for a mausoleum. Later a plague epidemic decimated Rome's population and Pope Gregory I saw the Archangel Michael sheathing his sword (meaning the end of the epidemic). Attached to the Vatican by a passage in the castle where popes took refuge when things got rough. It's a place full of history that's a real delight for the visitor.

The best of Rome

See the sunset there is awesome

I’ve learned about it in my history class in school.

And it was great to finally be able to see it for real.

Walk to it, alongside Tevere river and take some amazing pictures, especially during nighttime.

Such a magical place

I think I’m gonna go back there to take a lot of pictures, it’s definitely incredible.