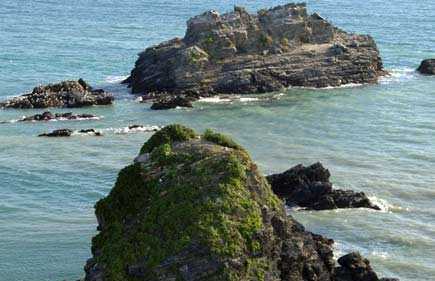 From the Cruz Santo lookout point we can see three boulders that have been declared a natural monument in Almuñecar. The Peñón de Fuera is the rock formation that's further away from the coast. In front of it you'll see the Peñón de Enmedio, which is separated from the other two boulders by water. Finally, there's the Peñón del Santo, which is right on Almuñécar's beach, separated into two parts, the Puerta del Mar beach, Caletilla, and the San Cristobal. El Peñón del Santo is the largest boulder and it's approximately 30 meters high. You can get to the highest area by the ramp and it's gardens, which is where the Cruz del Santo is.